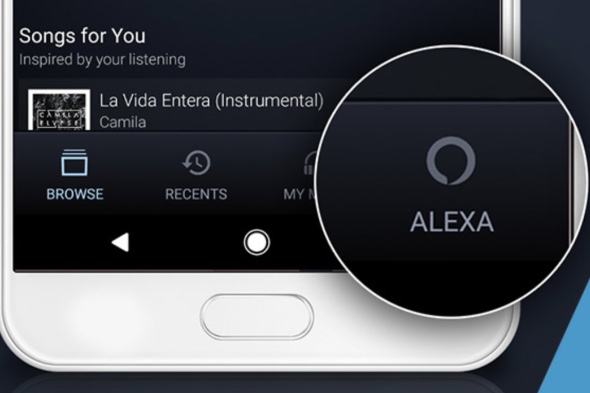 Amazon announced yesterday that they are bringing Alexa to the Amazon Music app on both iOS and Android!

This will allow listeners to use voice controls with their music. According to the company, the feature is now available Germany, the UK, Australia and the US, and will allow users to perform actions like requesting an artist, songs or any music for various moods and activities.

For example, one can now use voice control to pick music for a roadtrip of for their job, the same as you can do with Alexa on Echo speakers.

In addition, you can ask Alexa to play songs that you do not know the name of, only the lyrics (another option Echo owners have had for a while now).

One of the top uses for the Alexa-powered Echo speakers is playing music, as well as other everyday tasks like asking about the weather, the news, or setting reminders. That is why it makes sense that Amazon would want to offer similar voice controls in its music app!

This move also offers Amazon a chance to differentiate its third-place app from market leaders like Apple Music and Spotify. While Apple Music works with Siri, it is designed for those already in Apple's ecosystem who listen to music on their iPhone. However, Apple Music on Android does not have a voice control option.

This isn't the first time that Amazon has expanded Alexa to its mobile apps. In fact, earlier this year, the company added Alexa to its main shopping app on iOS and later brought the features to users of the Amazon app on Android.

The bigger picture includes giving Amazon a way to introduce Alexa and the virtual assistant's capabilities to those who have yet to invest in any Echo device. This allows them to test out Alexa and become more comfortable using voice commands.

Putting Alexa into Amazon's suite of apps is an excellent way to give those potentially interested in buying an Echo a good preview. After all, if they're using Amazon Music to stream their favourite music, they are more likely to consider an Echo speaker over the Google Home or Apple's forthcoming HomePod.

According to Amazon, the Alexa integration will be available in the latest version of the Amazon Music app for both iOS and Android – which means you'll need to update if you have an older version of the app installed.