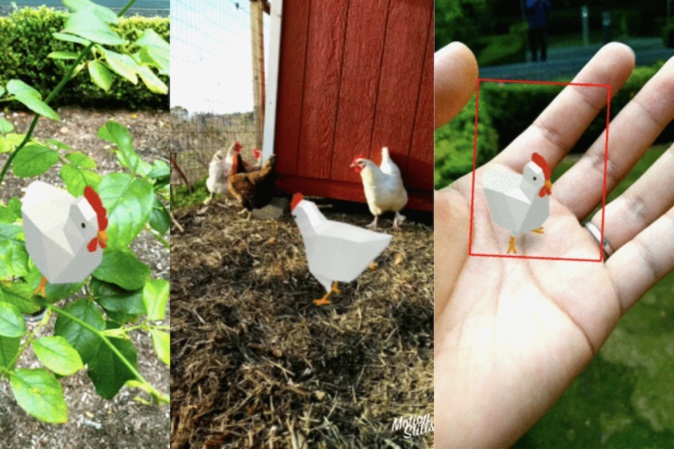 Motion Stills is "an app from Google Research that lets you capture short videos and transforms them into beautiful cinematography or sweeping cinematic pans using our advanced stabilisation and rendering technology."

The AR mode does not run through Google's ARCore system, but instead the Google Research team says, "With the new AR mode, a user simply touches the viewfinder to place fun, virtual 3D objects on static or moving horizontal surfaces (e.g. tables, floors, or hands), allowing them to seamlessly interact with a dynamic real-world environment."

The team shared a sample of the new AR mode in action, which shows off the capabilities of the new feature as well as the development team's fascination with chickens.

The only thing the team might love more than chickens itself is gyroscope and motion tracking. The technical synopsis of the AR mode's functionality explains that: "AR mode is powered by instant motion tracking, a six degree of freedom tracking system built upon the technology that powers Motion Text in Motion Stills iOS and the privacy blur on YouTube to accurately track static and moving objects. We refined and enhanced this technology to enable fun AR experiences that can run on any Android device with a gyroscope."

Google's Motion Stills is a long way away from being as powerful or relevant as Snapchat's Facebook, so the release of AR mode shouldn't be considered Google's step to take over the two giants. What should be exciting is that Google has taken another step to expand its AR products.