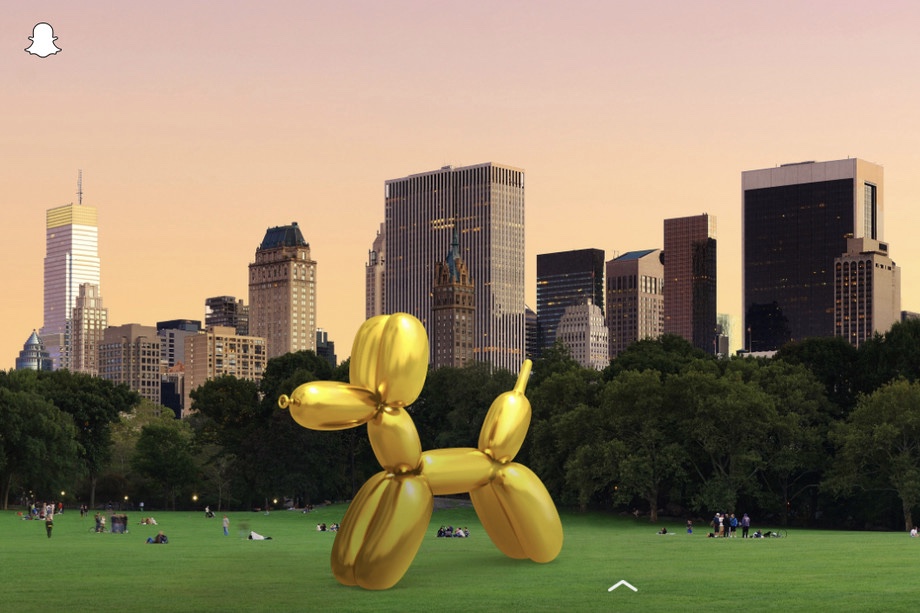 How would you like to be a part of the "Artwork All Around You" project? Well, all you'll have to do is open Snapchat and become a part of the gallery!

Snapchat is planning to launch a new art initiative aimed at using augmented reality to feature art installations worldwide. A website, art.snapchat.com, randomly began a countdown earlier this week and a snippet of javascript underlying the page seems to confirm that the reveal is a collaboration with renowned artist and huge Snapchat fan Jeff Koons!

In addition, the countdown clock happened to be counting down to Snapchat CEO Evan Spiegel's appearance at the Vanity Fair New Establishment Summit in Los Angelas yesterday. According to a Business Insider report, you can even see the image behind the countdown clock featuring Koons' "Balloon Dog" and other pop culture-inspired art pieces, as well as the name of Koons' new project, "Artwork All Around You", by simply setting your computer clock 24 hours forward!

Over the course of the last two years, the app (owned and operated by Snap Inc.) has made a steady push into AR. They experimented first with its lens feature that adds real-time effects to a user's selfie.

Over time, the feature has evolved into real-time virtual camera effects – what Snap is calling "world lenses" – that augment what users are seeing through the camera lens of their smartphone.

It isn't clear yet as to how the art project will manifest in the real world, but it will likely involve digital works designed by Koons that appear in real-world locations – geolocked to a user's location in ways similar to Niantic's AR mobile game Pokemon Go.

Jeff Koons is known in the art scene as working with pop culture objects and elaborate sculpture techniques – and he's a big Snapchat fan. When Koons' "Balloon Dog" – a giant stainless steel recreation of a balloon animal – sold for a record-breaking $58.4 million in 2013, Koons posted a self-congratulatory selfie on Snapchat.

In an interview earlier this year by iD UK, Koons said, "I think technology has informed us so much, it lets us appreciate other works of art. I think it's wonderful that people can, you know, pick up a phone and feel the freedom of – like Snapchat – making something that is aesthetically and emotionally pleasing and fun, and to just feel that experience."