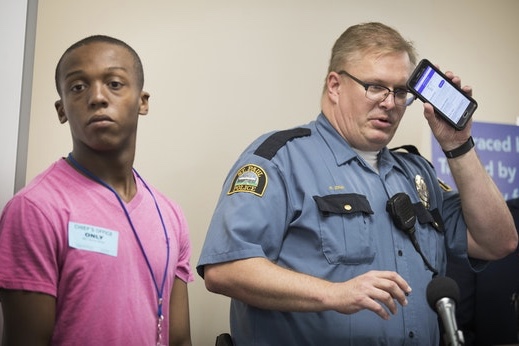 In case you haven't heard of the Vitals app, it is designed to provide first-responders and officers with data about a medically vulnerable person's diagnosis, medications and caregiver contact information, as well as suggested ways to calm the person down.

The app is made for people with "invisible illnesses", those who are disabled and those who are mentally ill. St. Paul police officers are the first to use this app to help vulnerable groups of people!

The new smartphone app gives these officers information about vulnerable people during a crisis to improve interactions with these people. The St. Paul police department announced that it has become the first in the state to use Vitals.

"For paramedics and officers to have that information on scene is invaluable," said Sgt. Mike Ernster, the St. Paul police spokesman.

In order to make use of the app, an individual or their caregiver signs up online and supplies relevant information. After that, officers receive an alert when they are near someone using the app. The app is aimed at people with "invisible illnesses" who aren't always able to communicate effectively in difficult situations, according to Rob Zink.

Because people with those diagnoses are prone to wandering off, behaving unusually or having public meltdowns, the information would help officers understand the context of their behaviours and know how best to handle it.

A six-month pilot program in St. Paul tried out the app with about 10 officers and 100 vulnerable people. The app was developed by VariAware at Minnesota tech company, along with the Police Department and the Autism Society of Minnesota.

Dawn Brasch, the Autism Society of Minnesota's interim executive director, said "I just think it's going to be a great opportunity for our families", adding that the Vitals app is "an amazing tool." By mid-September, all 600 St. Paul officers will have the app on their phones and will be trained to use it, according to Zink.

The beginning point for the app came a year and a half ago when an interaction between police and an autistic child turned physical.

"We were sitting in the office and one of the things [we said] was, 'God if I only knew that person was on the spectrum, how would have the whole incident changed?'" said officer Zink, who has two autistic sons.

The app requires users to wear a card, button or bracelet called a "beacon" that alerts officers when they come within 30-80 feet of them. When the person is near the officer, the officer will receive an alert from the app, and the person's profile will appear.

On top of a name, description, photo and diagnosis, the profile also includes information about stimuli that can cause the person to act out and tips to de-escalate the stressful situation. It may even include audio clips, such as the voice of a family member, that can be used to calm the person down.

Charlene Wilford in St. Paul was one of the people that participated in the pilot program with her son, Devonte Ray-Burns (14) who has autism, attention deficit hyperactivity disorder and developmental and cognitive delays.

A few years earlier, Devonte ran away and was missing for hours. The Vitals app should now be able to help if something similar to this happens again.

20-30 police departments in the area have expressed interest in the technology, according to Vital's Co-founder, G.L Hoffman. National groups including the Los Angelas Police Department have also requested for information.

There are, however, obstacles to overcome when it comes to the app. This includes getting people to sign up. According to Zink, if 10,000-15,000 people in St. Paul upload profiles, he would consider that a success.

In addition, the app costs money. The St. Paul Police Department will not pay anything to use it for a few years because of their contract with Vitals. However, memberships cost $9.95 a month. Vitals employees have said that they are working on a way to make the app cheaper or free for people with low-incomes.

Some disability advocates have had questions about privacy and how secure the data would be once on the app. Brasch said participation is completely voluntary and individuals can choose how much information to upload. In addition, she adds that officers don't use the app unless there is a problem.

Jillian Nelson, an adult with autism, was one who participated in the pilot program. When she had a meltdown at a store after the program was completed, officers used her vitals to understand what was happening.

"It turned the situation around in seconds," Nelson said. "They were able to see me as someone who needed help."

Congratulations to the St. Paul Police Department, hopefully, the Vitals app will soon be used by many police departments as a method to help vulnerable groups of people!