THE APP THAT COULD SAVE YOUR LIFE AT THE AIRPORT 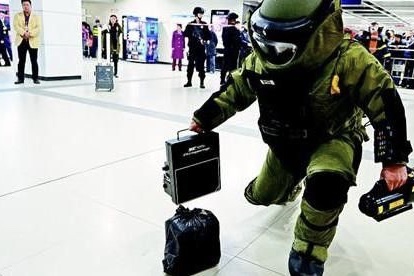 With terrorism becoming a rising issue all over the world today, people are desperate to find a way to identify and eliminate potentially dangerous individuals so as to avoid putting others in harm's way. Airports and subways have already beefed up their security measures but only have gut feelings and general profiling to be able to identify dangerous travellers.

Unisys is currently attempting to aid authorities in this flagging process to identify suspicious people, luggage and cargo.

The system they are developing is called LineSight that will process information regarding airline tickets and cargo manifests, and will pull information from organisations like immigration agencies and Interpol. After processing this information, the system will identify whether the person or cargo should be admitted, detained, or investigated further. The system will use machine-learning to fine-tune the process to more accurately flag those who either match suspicious patterns or otherwise mark abnormal cargo's in transit.

John Kendall, director of border security programs at Unisys says that: “You can establish business rules that say, ‘for this type of risk of this type of level, take the following actions. If this one happens, immediately interdict the passenger.” The system will be able to pull up travel histories of people and packages in order to identify any concerning relationships with other travellers who have previously been flagged. It will alert authorities to any packages that have been shipped from an unusual company that doesn't generally send these items. The system works according to a set of rules coded into the software of the app or taught to agents to identify known suspicious behaviour and patterns.The rules programmed into the app can be adjusted according to the needs of the agency. The Unisys system is already used by U.S. Customs and Border Protection as well as agencies in Europe and Australia.

Unisys systems have tested biometric systems that scan fingerprints and faces at the border, and offers software that can do facial matching on video streams in real time. But this information won't be processed by the app itself, however, if a traveller has been identified as a certain person by such a system beforehand, that information would be sent into LineSight’s database.

The company is aware that these kinds of flagging systems can be biased towards a persons nationality or race and they, therefore, have to face a whole barrage of legal rulings with regards to constitutional rights. But Kendall is sticking to his guns saying: “If you’re a legitimate traveller or a legitimate shipper, what you should find is that clearance should be faster than ever before. It should make a big difference to the traveller or shipper because the number of actual risky travellers or shippers is very small: it’s less than one in a thousand.”

So, what do you think? will it make travelling easier for the good guys or is it a case of big-brother, always watching...