UBER IS CLOSE TO GATHERING 1 MILLION SIGNATURES IN 'SAVE YOUR UBER IN LONDON' PETITION! 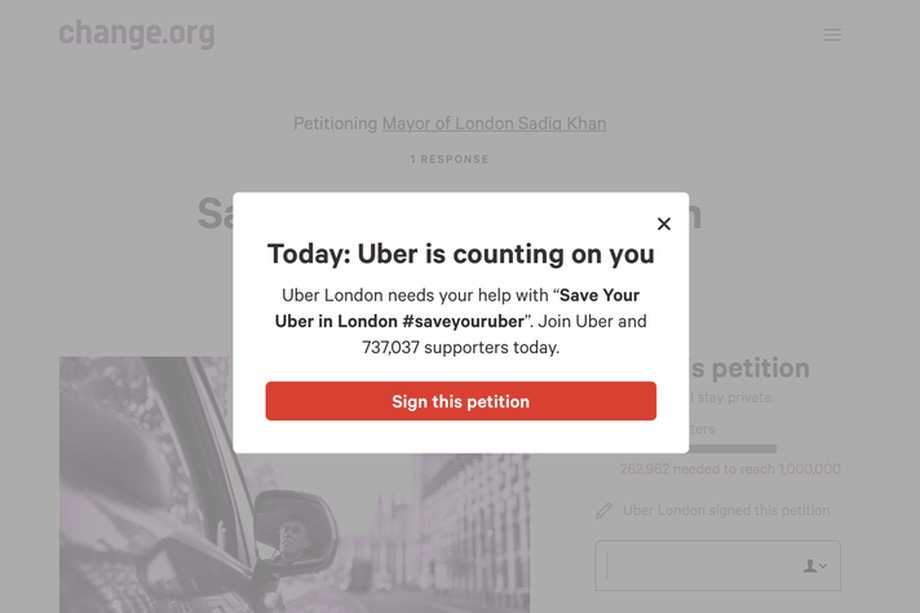 After losing its license to operate in London on Friday Uber has already received over 700,000 signatures on a Change.org petition it launched to reverse the ban and save the service.

The petition asks TfL to reverse the ban and is being promoted whenever the app is used in The City. London's transport authority, Transport for London (TfL) has stated that it would not renew Uber's license to operate in London when it expires at the end of the month – claiming that Uber's approach and conduct have "potential public safety and security implications."

However, Uber says that 3.5 million Londoners rely on the Uber service and that the ban restricts consumer choice.

"If this decision stands, it will put more than 40,000 licensed drivers out of work and deprive millions of Londoners of a convenient and affordable form of transport," the petition reads.

Almost 750,000 people had signed the petition at the time of publication, and the goal is to reach 1 million signatures before it is handed over to London Mayor Sadiq Khan.

Khan has already responded to the Change petition and posted on the campaign page that Uber has let down its customers and drivers: "As Mayor of London I welcome innovative new companies that help Londoners by providing a better and more affordable service – but providing an innovative service is not an excuse for not following the rules."

Uber's current license to operate will not expire until the end of the month. The company can still operate until all appeals to TfL's decision have been exhausted!