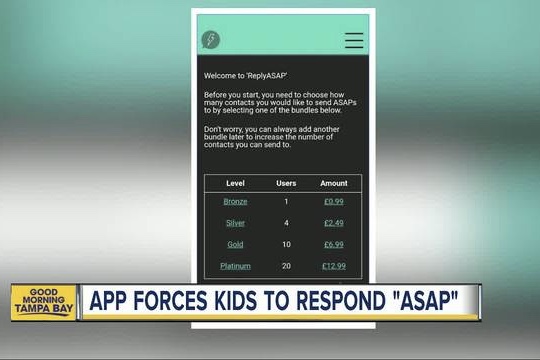 A father has created the ReplyASAP app that forces children to read messages from their parents. The app takes over the phone screen, and DEMANDS attention.

Kids these days are consumed by their phones – yet they're often difficult when it comes to responding to their parents' messages. It doesn't help that children of this generation know quite a bit more about technology than their parents do. This helps them to ignore mom and dad – allowing them to do what they want.

As a result, Herbert conceived ReplyASAP – an app that forces your child to address your texts How? By annoying the hell out them...

"I wanted to be able to set an alarm on his phone – that was the gem of the idea. Alarms sound even on silent," Herbert told CBS.

But then the idea developed into a greater idea – completely take over the child's screen until they respond. The teen is offered only two choices: to snooze for three minutes or cancel – and the parents get a notification about which choice they made. Teens can't do anything on their phone until they address the message.

Herbert has insisted that the app should only be used in emergency situations. Even though it may be tempting, the app shouldn't be used just to annoy your kids. In fact, he said it's not necessarily about forcing your kids to reply. Instead, "it is simply a means of getting an important message to the child, even when they have their phone on silent, and for the parent to know they have seen it," says Herbert.

In the same way, the app can also be used by kids who need to reach their parents urgently. Herbert says that the app is simply a way of ensuring that an urgent message will be seen by children.

However, the app is currently only available on Android, and it costs $1.27 to have just one person connected, more if you want to add extra people.

Some have complained that the app is bypassed too easily. One complaint by Shaun Soong, for example, pointed out that phone users can simply switch off text messaging on their devices, and said: "Not a worthy app. My gal simply cancelled the SMS and continued to play games. Useless." Herbert responded to the complaint, saying "this app requires the consent of both parties, deliberately so. It is not a punishment and the parent and child should be discussing why it's there."

It's also important to note that this app doesn't have to be used only between a parent and child – it can be used between friends, partners or other family members too. Once you've agreed – there's no switching it off.

Watch the video to learn more about the app!