VIDEO: VINE'S FOUNDERS ARE BACK WITH A BRAND NEW APP! 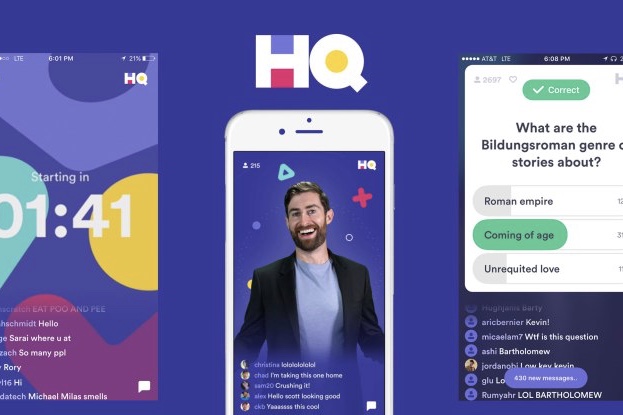 “It’s a way to give people a chance to have fun, maybe win, maybe learn something new.” That’s how former Vine co-founder, Rus Yusupov, describes his new trivia game show app HQ, that feels a little like Who Wants to Be a Millionaire meets Facebook Live.

HG's iOS app is simple to download and once you get started and play along with the presenter, Scott Rogowsky asks around a dozen multiple choice questions. Guess the right answer within 10 seconds and you on to the next question – after Rogowsky finishes joking about the answers. Guess wrong, you are out, but you can still comment and watch to see which players nail them all and split prize money they cash out on PayPal.

By watching the video below via TechCrunch, you can't help but get excited. By combining the interactivity of a game show, the allure of live video and the production that might remind you of Hollywood standard, HQ feels more alive than most anything on your phone or TV nowadays.

HQ has been slowly combining the trivia app charts since late August when it launched. It had about 3,300 concurrent players competing for a $150 jackpot, which is a thrill to watch and probably play (we still need to find out for ourselves).

There is a smooth difficulty curve from easy questions like “What could you buy on Amazon.com when it first launched? Cars, plants, or books?” at the start of the game to tougher ones like “Which of these foods is NOT made from corn? Polenta, Grits, or Gruel?” at the end makes you sure you’ll do better if you play more.

Hopefully HQ will spice things up with images, audio and other media-based questions, celebrity guests, in-chat badges for past winners or special lightning rounds. There’s plenty of inspiration on which to draw, from the old school black-and-white TV trivia shows to edgier computer games like “You Don’t Know Jack.” and HQ could also use an Android app, as it is currently only available on iOS.

Have a look at the video and if you are on iPhone, head over to the download button, who knows, you might hit the jackpot – if you are clever enough!