VIDEO: YOUR ONE STOP NEIL PATRICK HARRIS STOP ON YOUR PHONE 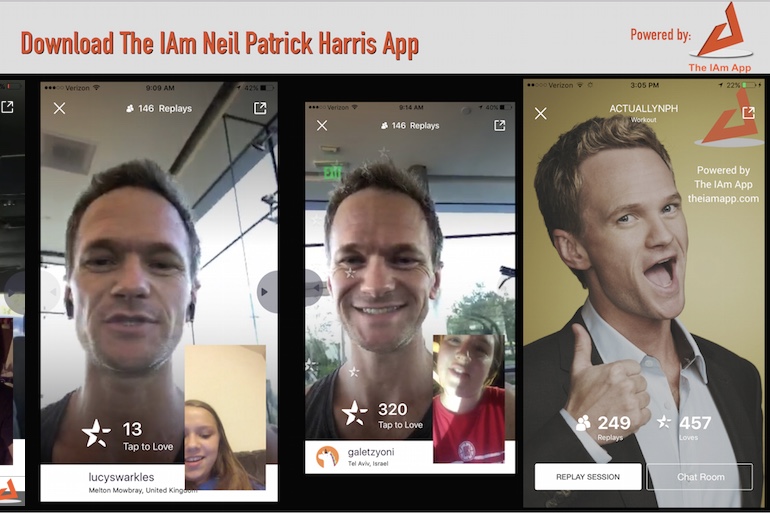 Suit up! Neil Patrick Harris is back and easier to keep up with! Anyone who is a massive fan will always follow their favourite celeb on all social media sites. But, trying to keep up with the hype on at least four different sites is near impossible.

The IAm Neil Patrick Harris app pulls all of his Twitter, Instagram and Facebook posts and integrates them all into a single app. Since Harris has jumped on board, over 250 celebrities have followed and created profiles such as James Corden and Bob Saget. The app also allows celebs to interact with their clients more easily through the Live Streaming and Chat Room functions.

The IAm app also allows celebrities to have more freedom in managing their social profile, will even take impromptu live videos specifically for the app, and can select individual fans to chat with during the live stream. Harris describes it as a "one-stop shop" for the ultimate fans who get notified as soon as the celeb posts anything on social media. It does require the users to actively turn on the notifications for the celebrities posts which will pop up as the celebrities face.

Being an avid user, Harris says that another advantage is that due to the specificity, there are far fewer trolls out to spread negativity. Since the network is more secure and supportive, celebs feel more comfortable to post more often about their personal lives. The app is currently available on iOS and Android at no cost but the platform is already making moves to expand the app into a TV channel. The platform will literally give fans a whole TV channel on one celebrity feat smart TVs, set-top boxes and car infotainment systems.

Long-term plans involve the platform evolving to the point of gaining license rights to the celebrities TV shows, in this case How I Met Your Mother and show the episodes on the TV shows. They are currently entering into a partnership with Samba TV, which is a content recommendation engine to collaborate and grow the app to full-on TV channels. It would also include videos or shows based on the celebs interest such as magic and art.

The whole platform aims for specificity and mega fans that respond to and engage with such specific content. Eventually, IAm will turn into thousands of celebrity specific apps and channels that captures their specific fan base.