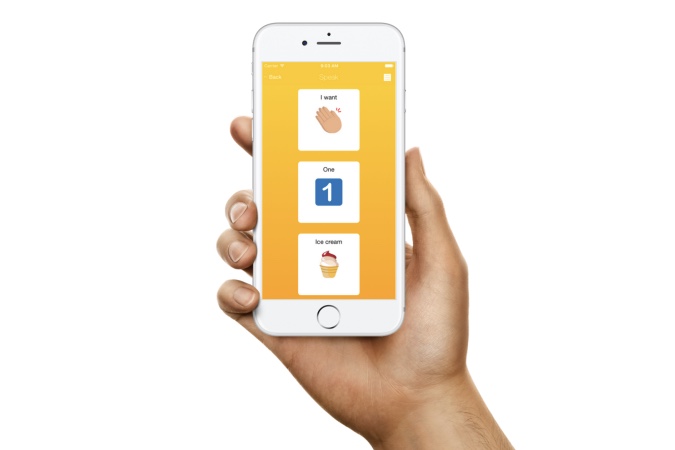 Rayden James has a son with autism. Since his son is nonverbal, the struggle to know what he wants, needs and thinks about is frustrating.

When you are attended to a nonverbal child, figuring out how to give him what he wants is overwhelming. What does he want? What does he think? What does he need? Why is he crying?

It all makes you feel hopeless as a parent, unable to give your child what he needs.

That is why James came up with Upcard, an app that helps nonverbal children to communicate exactly what they want.

"One of the more heartbreaking frustrations is when you can clearly see that your child has something to say to you," explains James. "Something they want, but the words won't come. It's like you can see in their eyes that they are hoping you can just know."

However, even though James' son cannot articulate words, he does have a visual vocabulary. He can use pictures to communicate – and James created an app to help him do exactly that. James says it has been a "life-changer" for his family.

Based on the picture exchange communication system (PECS) which was developed for learners with cognitive, physical and communication challenges, Upcard is made up of "picture cards" that users can place in sequences to form simple statements and requests.

See the picture for an example: I want + One + Apple.

Users of the app can choose from a library of picture cars or add their own from their device. For each card, the parent or caregiver can also record themselves speaking the word. In this way, the user keeps hearing the same voice, without any subtle changes that people on the spectrum have a hard time adjusting to.

Studies have shown that mothers' voices play a particularly important role in a child's brain, social and emotional development – so it makes sense.

James remembers the first time his son walked over with his iPad and opened Upcard. He put together the sentence with the picture cards: I want + Help + iPad.

After a while of the same confusion with the sentence (the iPad appeared to be working), James realized what his son was asking for. "He had been watching YouTube, but the sound had been turned off, and he didn't know how to turn it back on. So I reached over and turned it on for him.

James' son looked his father in the eye, smiled, and ran off.

"I had understood what he wanted," said James. "For the first time ever. He was nearly 4 at the time. I couldn't stop the tears."

James, his wife Emelie and their son now use Upcard every day for events and tasks including potty training, starting school or buying new shoes. James' son has used the app to ask his grandfather to look at some ducks with him. Now, his teachers open the app anytime they need help communicating with him.

In addition, the app lets parents create structured visual plans for a child's day so they'll always know what is coming next, as well as tracking their nutrition, speech, mood, sleep patterns and other activities.

James says his ultimate goal for the app is to help families create more "good days."

In a heartwarming moment, James' wife sent James a screenshot of a sentence their son has created: I want + One + Pappa.

"I still laugh at the message", explains James.

Upcard is free on iOS and Android!